Ruggedly Handsome – TraffiCalm Products Are Built For a Tough Life 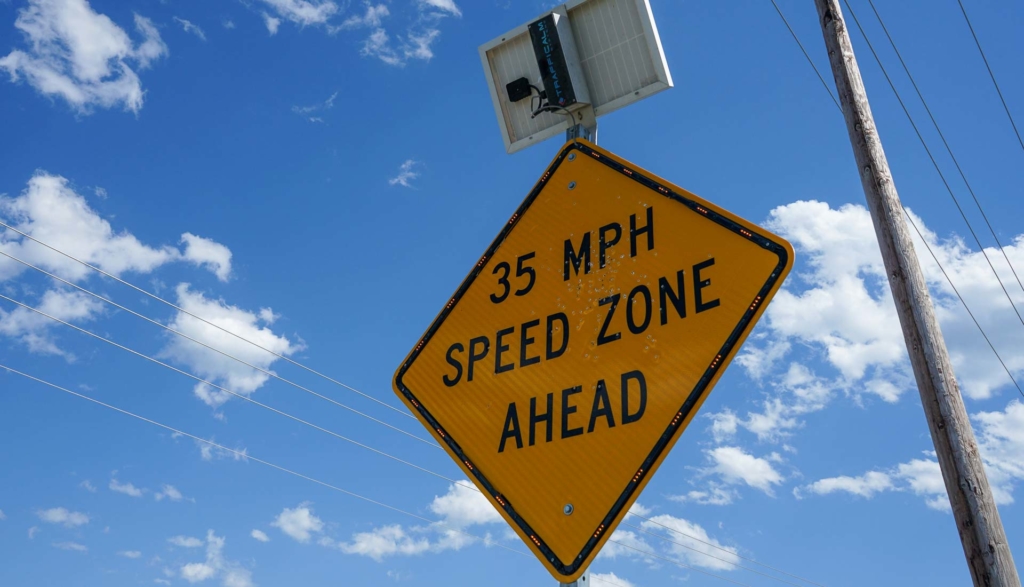 No product leaves our dock with a defect, and any employee who notices a defect has an obligation to raise awareness to it (paraphrased, but on point)

This policy encompasses everything from the solder on our LEDs to the finish on our reflective decals. With such specific expectations on how our products arrive to their owners, it’s tough to admit the thereafter. The vast majority of our signs live a long, successful life calming drivers and saving lives. But occasionally, we are notified of “an incident,” often preceded by a request for our (generous) warranty statement.

Early on, an unfortunate driver feedback sign was nailed square in the middle of the display with a pumpkin thrown out of  moving vehicle (presumably in late October). The protective Lexan window was shattered, the supporting structure was blown out, but the radar and display still worked like new. Our techs hosed off the pumpkin juice, replaced the lexan and structure, and shipped it off for years of additional service.

There was the time a Driver Feedback Sign was shot with a compound bow (perhaps, more medieval-ly, a crossbow) in the midwest. The owner of this sign sent it in for repair with the arrow still lodged into one of its display modules, not unlike a head wound victim would show up at the ER. Our tech’s remedy- pull the arrow out and watch the radar and half the display still work fine. Again, a few reasonable repairs and back into the field it went.

During the hurricane season of 2017, several of our signs were damaged in northwest Florida. I say damaged, but they were actually ripped from the post, blown several blocks down the street, and left in the midst of destruction such events result in. Having been submerged in some very corrosive water for several days the electronics were not salvageable. But the batteries and housing were fully intact and ready to be populated with new display components; a quick repair for our team.

Our introduction of TraffiCalm LED Sign Enhancements came with one concern- how tough can we really build it? Of course, we all know that signs get shot, defaced, and otherwise mistreated on an regular basis. Our RRFB more than proves a defensive point. Potted, sealed, ruggedized, hardened, brawny- whatever adjective or descriptor you use for our rectangular rapid flashing beacon it is all of that and more. See for yourself, we cut a side off one on a bandsaw, ran it over with a truck, and have submerged it in a aquarium for 6 months. Just to be sure, I went and checked- it is still flashing away next to an plastic water feature designed to entertain fish.

San Antonio, Texas is strewn with our wrong  way mitigation hardware. The only problem they’ve experienced was when a sign was winged by a bus mirror. In this case, the customer bent it back into approximately straight condition and bolted it back to the post. A few days of awkward looks (and public concern) and the sign was back to stopping drivers from entering the highway the wrong way.

Then there is “the one.” Installed early in the design cycle of our LED Sign Enhancement Ring, we worked with our local municipality to enhance a nearby speed reduction sign.  Set on a high-traffic, but agricultural roadway we anticipated an exercise in our design’s weather proof-ness and effectiveness. What we got was a testament to our engineer’s clairvoyant anticipation of public abuse. A year into service, we received a call that the ring was not affixed to the sign. The culprit? Shotgun spray (in city limits, no less) across the face of the sign had flexed the aluminum enough to pop the ring off and take out a few LEDs. The city sign tech (Ed M., in this case) stuck the ring back on, and it was back into full operation. Because we use so many LEDs to illuminate the ring, the loss of 2 or 3 didn’t have a damning effect. Several months later one of our employees noticed the entire post, sign, and solar panel laying on the ground perfectly assembled but slightly disheveled and flashing its lights at the sky above. Again, Ed M. went out, leaned the sign back up and we were in business.

Of course, there is the unpreventable scenario where nothing will prevent total destruction, but we have designed our product to endure a lot of abuse, and the day-to-day operation of thousands of systems across the globe is proof.

About the Author: Andy Pedersen