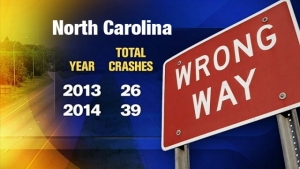 The National Transportation Safety Board estimates that there are over 300 fatal accidents caused by wrong way drivers each year. And while the problem of wrong way driving has been a concern for some time, various states are noting an increase in wrong way accidents in recent years. Officials in North Carolina report a 67% increase in wrong way crashes in the last year. Georgia officials marked a 100% increase in crashes involving wrong way vehicles from 2013-2014, and the numbers for 2015 are even higher. In the last four years in Texas, it has been reported that 269 people have died in wrong-way crashes and another 2,800 more were injured. And in the last year, those numbers have risen by 13%.

So what does this all mean? It means that highway and law enforcement officials across the country are becoming alarmed and are actively searching for flexible, effective and affordable ways of curbing wrong way driving situations and accidents. The announcement of Trafficalm’s new product The TraffiCalm Wrong Way Warning System™ is being enthusiastically received by these officials especially because of it’s simplicity, scalability and affordability. The warning system can be retrofitted on existing Wrong Way signage, and yet has the flexibility to fit many highway traffic situations because of radio communication between its detection/activation unit and remote warning devices on other area signs. State officials are consistently surprised at how affordable the TraffiCalm™ solution is, making it possible for them to install in many more dangerous intersections than with other more expensive systems.

About the Author: John Hentemann

[accordian] [toggle title="A Little History"]Under a private label agreement, our parent company manufactured the first driver feedback signs for 3M Traffic Safety Systems in 2001. And our team, which has been together for two decades, has since continued the responsibility of designing practical, affordable, and reliable traffic solutions.[/toggle] [toggle title="The TraffiCalm Philosophy"]We hold ourselves to the highest standards of integrity and quality. Our engineering team is dedicated to designing cost-effective solutions, with the end result of fabricating driver feedback and variable speed limit signs that withstand adverse conditions, deliver results above and beyond required government certifications, and exemplify efficiency.[/toggle] [toggle title="The TraffiCalm Promise"]From neighborhoods to educational corridors, from work zones to highways, we are committed to protecting drivers, pedestrians and property. Our dedication to safety and quality encourages us to instill excellence into everything we do and it is found in every circuit we solder, every email we send, and every driver feedback sign we ship is another road made safer.[/toggle] [toggle title="Resources"]At TraffiCalm, we seek to provide ideal solutions to your traffic challenges, from finding the right traffic calming product, to helping you gain funding for implementing traffic calming measures, to even recommending installation contractors for your region.[/toggle] [/accordian]

[testimonials] [testimonial name="Joe Gustafson" company="Washington County Public Works"]"During a one-year study, conducted by Washington County in two site locations, a 15.5% mean speed reduction was recorded. "We (Washington County) have found the TraffiCalm radar speed signs to be effective at creating earlier speed compliance in these areas…braking in advance of the transition, resulting in measurable speed reductions within the transition area."[/testimonial] [testimonial name="Mark McFall" company="Whitworth University"]The street at the front of Whitworth University’s campus is a two-lane (previously four), 30 MPH arterial, which is busy most of the time.  Students and staff must regularly cross this street on foot and the speed of the vehicular traffic was a constant concern.  As part of our solution to this problem we installed two TraffiCalm Systems driver feedback signs two years ago.  I believe they have had a calming effect on traffic speeds and we are very pleased with their performance.  These signs are high quality, state-of-the-art technology, very programmable, durable, and fairly priced.  We received great after-the-sale support from TraffiCalm Systems as well.  I am pleased to endorse these products."[/testimonial] [/testimonials]
Page load link